Products manufactured under the RAVAK brand, designed by Kryštof Nosál, achieved further heights in the field of international design. In one of the most prestigious and respected international competitions, iF DESIGN AWARD, the 10° bathroom concept won over the other 388 products who entered the competition in the Bathroom category. At the same time, RAVAK became the only Czech company to have received this award in the category. The newly introduced bathroom concept Forms also achieved success, this time in the Czech national round of the EDIDA (Elle Decoration International Design Award) international competition run by twenty-five world editions of the Elle Decoration magazine. The concept shall go on to the international finals whose results shall be announced in April during the Milan Design Week.

The designer Kryštof Nosál has been working for the RAVAK brand since 2006, when their very first co-operation resulted in the iconic bathtub Evolution, winning the 2006 Excellent Product Award issued by CZECHDESIGN. A graduate of the Academy of Arts, Architecture and Design in Prague, he received, among other awards, 2nd place in the Electrolux Design Lab International Competition in New York and last year, thanks to his inventiveness, the RAVAK brand received the international award Red Dot for the design of the 10° concept. He has been repeatedly nominated for the Czech Grand Design award for his other work for RAVAK, and his seminal concept Chrome became one of the most popular bathroom solutions on the current market. Kryštof Nosál is the creator of the bulk part of the new RAVAK products. 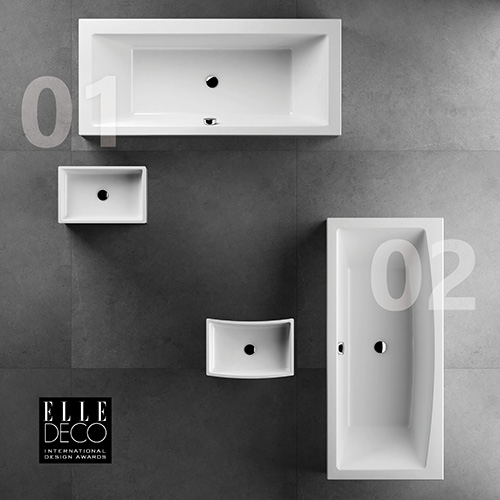 iF Design Award along with the Red Dot Award represent the world pinnacle in professional competition in the field of design. This year's iF received record-breaking 5,300 applications from more than 50 world countries. An international committee of fifty-eight experts in the field voted for the products entered into the current season of the competition.

The EDIDA award is awarded by individual national editions of the ELLE Decoration magazine from twenty-five world countries. Elle Decoration is a quarterly focusing on interiors, design, architecture and art and is issued as an affiliated publication to the fashion monthly ELLE. One of the holders of this year's EDIDA award, just like last year, is the author of the Forms concept for RAVAK, Kryštof Nosál. "We are overjoyed to be working with Kryštof, as he is able to provide the central idea, new practical advantages and original style to even the most basic products, such as washbasins and bathsThese two new awards make us all the happier, since they represent the validation of our long-term strategy of investing into our own quality design with focus primarily on comprehensive bathroom solutions," concludes RAVAK's marketing director, Jan Hudák.